Originally, I wanted to create an "inretinal" film, a situation in which I could see my life's film reeling off, as happens (in most cases) just before death. I hoped to discover this by reproducing the famous scene of a Buster Keaton-film (this scene has been re-interpreted by an artist called Steve McQueen and also by The Chemical Brothers in one of their video clips). The creation of the film, its difficulties, the re-installation of the set torn in a storm and the risk undertaken (the 6-meter-wall is impressive but scary when falling), forced me to face continually the irrationality of the project. Therefore, I had to choose carefully the architectural element to confront. I borrowed the austere and pure form of the house, designed by Wittgenstein for his sister, whose proportions ooze the kind of cold rationality which is the exact opposite of the invention which brings this video to life. 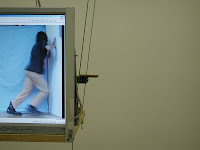 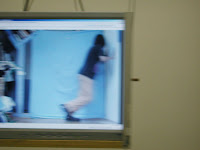 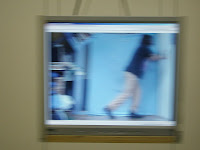 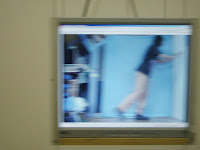 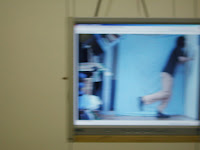 PACSIKA RUDOLF
Lives/works in Budapest, Hungary________________ 1961 Born Mezőhegyes, Hungary - Rudolf Pacsika got a postgraduate degree from the Rijksakademie van Beeldende Kunsten in Amsterdam, and later spent extended time in France. He is best known for his installations, although he has made numerous drawings and photographs also. His art is basically conceptually inspired. While many contemporary artists try to use as many mediums and layers as possible, Pacsika’s aim is to come through without mediums and more immediately. His installations, videos, photographs and drawings are made with this in mind. He likes to use every-day objects in his work, to produce some unusual context and relationship with and between them, to establish a situation that is new and makes various lines of interpretation possible. The movement, the tension of balance and bizarre situations that appear in his art help his works, so that their possible metaphysical interpretation does not descend into melancholy.